12 JulYou meet the most interesting people at events

Creating events is both intellectually stimulating and a great deal of fun.

Probably the biggest perk to event producing is the people you meet. From the most creative and lofty minds to the most down to earth, and from the gifted artist to the technically minded entrepreneur. Over the years, I have had the opportunity to meet so many luminaries in the media, government, business, finance, and the arts.

One of the most memorable events I’ve produced was a Newhouse/New Yorker session with Jon Stewart, held shortly before the elections in 2004. At the very beginning of the discussion Jon had to change from a lavalier microphone to a hand held and he was a true pro. He wielded his mic like a magician’s wand, enrapturing the audience with his wit and deep political knowledge. To this day, I think that he should run for President. 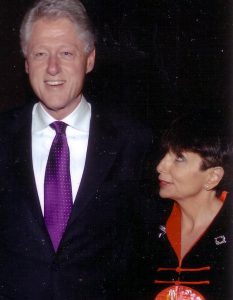 Speaking of Presidents, as you can tell from the picture to the left, I have a deep admiration for President Bill Clinton. So his being one of the presenters at the Newhouse School’s 40@40 Anniversary Gala was an honor. Having my picture taken with him, just the icing on the cake.

Still another highlight was listening to Bette Midler first rehearse and later perform in The Plaza’s Grand Ballroom at The National Audubon Society’s 2013 Gala. What a treat! She is so very talented and such a lovely person.

A few other unforgettable moments:

I look forward to sharing more of these memories, as well as lessons learned along the way, in the coming weeks and months. For now, stay cool during these dog days of Summer.

Get notifications about new posts and upcoming events!